It’s been a few years since we’ve had the blessing of a Rob Zombie film, so I was pumped to say the least.  We’ve got Sheri Moon Zombie, Bruce Davis, Jeff Daniel Phillips, Lucy Geeson, Meg Foster, Ken Foree and Dee Wallace starring.  Heidi (Zombie) works at a local radio station in Salem alongside her buddies Whitey (Phillips) and Munster (Foree).  One night they have a guest on the show that’s a loyal worshiper of Satan and doesn’t appreciate being clowned on by the hosts of the show.  Then suddenly a creepy ass box appears with a record inside it addressed to Heidi from “The Lords”. 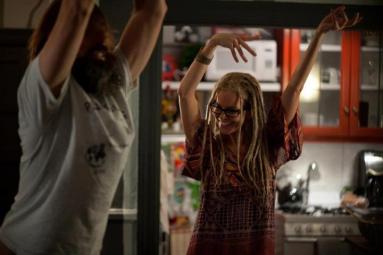 She’s getting faded one night and decides to give it a listen.  Getting the track to play is a bit of an obstacle, but Heidi somehow makes it go right.  It’s a pretty unnerving little tune, and it suddenly sparks visions of the town’s past and causes some interesting physical manifestations of its “power”.  Hell-bent on supporting a local artist Heidi plays the track on their show calling the band “The Lords of Salem” and intriguingly the women of Salem start acting a little funny.  Shortly after the DJs are sent some merch and tickets to an upcoming show for The Lords which they then promote.  As you can undoubtedly imagine, things start getting a little funny around this point.  Heidi is a recovering heroin addict which makes her arguments for “unusual behavior” a little suspect to her pals.  She starts seeing visions of witches being burned at the stake and doing all the weird nonsense witches do to themselves and each other.  From there the story kind of staggers about, Heidi getting worse visions and weirder things are happening to her.  Eventually it’s revealed that her trusted land lady is a witch, and her “sisters” have a master plan to hand Heidi off to Satan.

Ummmm…yeah.  Well, I can’t say many positive things about this one, but there were a few pros.  The witches were creepy, the gore was pretty gnarly, and Sheri Moon was in it.  That’s about it.  The story alone is pretty defective.  It tried really hard to be entertaining, I just felt like Rob pieced it together and didn’t put any passion behind it.  Of course I didn’t expect Devil’s Rejects, nor a film on par with his revisions of Halloween, but I definitely expected more than what I got.  I wasn’t into it, from the beginning.  Witches are cool but not THAT cool, so in his defense he was trying to polish a turd from the scripts conception.  The character development was sloppy, the dialogue wasn’t sharp and twistedly humorous or entertaining like any of his previous works so I just didn’t buy into it.  Sheri Moon was shockingly disappointing as well.  I asked myself about 100 times throughout the film how much longer we had to go, or if something awesome was going to happen at some point and it didn’t.  The ending, oh boy how it went wrong.  The film is supposedly about to climax and instead of delivering on a finale to the story he throws a diabolical montage of craziness that made me wonder if Zombie and his editor suffered from some serious ADHD and/or took some REALLY bad mushrooms.  Seeing golden Satanic priests masturbating and Sheri Moon riding a goat and little creepy midgets (little people?) running around all over the place solidified the loss of hope that somehow it could be saved.  Now I fully understand that when dealing with Satanism and the devil and all that shit that sometimes things get nuts, I get that…but in this case it was just overkill.  I didn’t need ALL THAT to understand that the devil was at play here.  I was in more confusion than I was the first time I saw the ending of 2001: A Space Odyssey…and I was 12 when I saw it.  I don’t know what he was thinking with this one.  I love Rob Zombie films, I absolutely love them.  I’m just going to live my life pretending that this one didn’t happen.