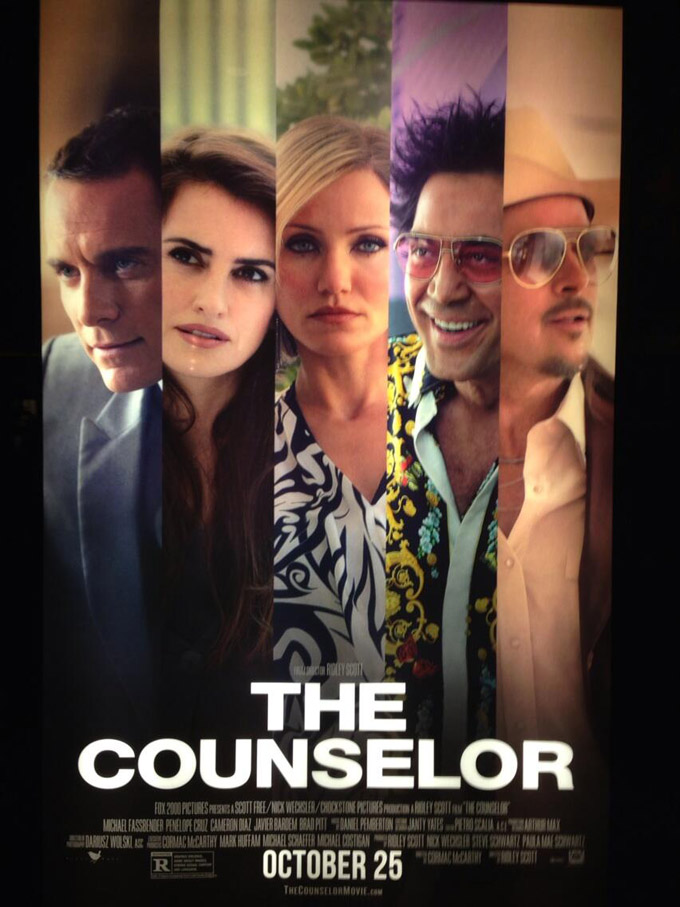 I went into this film with hopes standard to what I expect from Ridley Scott, especially with the cast line-up and writer; however was quickly disappointed.  The Counselor stars Michael Fassbender, Javier Bardem, Brad Pitt, Penelope Cruz, and Cameron Diaz.  The screenplay was written by Cormac McCarthy (No Country for Old Men-the novel) who made it very clear that he needs to stick to books.  Counselor (Fassbender) is a high end lawyer looking to further indulge his lavish lifestyle by making some investments in the drug scene.  He’s courting (clever?) Laura, a beautiful and mysterious woman played by Penelope Cruz.  He’s the retired playboy looking to settle down and she’s the perfect one to do it with. 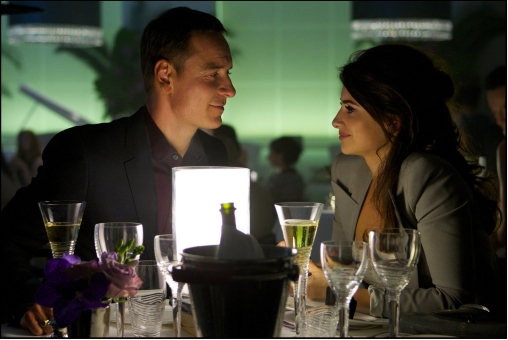 Counselor is buddied up with Reiner (Bardem) who’s an associate involved in the drug game and together they plan on opening a club.  Reiner is tied up with Malkina (Diaz) a ferociously desirable woman full of sexual flare.  From the get go you worry about her; she’s just very obviously out there.  Despite warning from both Reiner and a middle-man named Westray (Pitt) Counselor decides to risk it all and play his hand at the deal.  As large scale drug trades usually do, and as the trailer makes it very clear, something goes wrong.  The story quickly turns to every man for himself, and quickly spins out of control.  That’s about all I have on the plot, here’s why I give it a low rating.  Cameron Diaz is an actress I’m fond of and sure I respect her, but for some reason she just wasn’t doing this character the way it should have been done.  There were times that she just nailed it, but others she missed so completely I couldn’t take her seriously.

Cormac gave screenwriting a shot, and he failed miserably.  The story is ok, it’s your average drug trafficking story but with WAY to many insightful, preachy monologues.  Even the Mexican Cartel who are seemingly incapable of rational thought has the most epic of monologues.  The plot is extremely overdone, ½ the people I’ve spoken to about the film had only one question: “What the hell just happened?”  I don’t blame them.  It moved too fast and didn’t have enough substance to really hold you there.  The couple next to me gave up after an hour and just left.  Now, don’t get me wrong, there were a few times during the movie that I sat back and said “damn I’m into this”…but they were few.  Thinking back the only parts I actually enjoyed were those with Javier.

He brings such magic to the screen, even with a script that’s barely tolerable.  Also thinking back he didn’t have any monologues.  These monologues were SO over the top, it was face to palm every 5 seconds.  They would see the most minute object or occurrence and ramble for 4 minutes about all the symbolism and meaning it had and how it relates to death and the world and on and on.  Terrible!!  I’m not sure what Ridley Scott was thinking, but it was bold to support such a rambunctious script.  I’m a Ridley Scott fan (obviously, who isn’t) and for the first time I can say I am extremely disappointed.