Here’s it folks!  Thanksgiving isn’t one of my favorite holidays.  Don’t get me wrong…I love the food and spending time with family and friends apreciating the things we are thankful for, it’s just not my fave.  Some of my movie pics aren’t traditional either, but it’s MY list!  Here’s a list of movies I find myself watching every Turkey Day! (in no particular order)

Ah man, one of my all time faves.  Peppermint Patty has taken it upon herself to have a huge Thanksgiving Dinner and invite the whole gang-Linus, Snoopy and Woodstock.  Only thing is, she invites herself and everyone else over to Charlie’s house.  For 30 minutes he struggles as always to make things go right, but of course delivers laughs and sighs, and a great message at the end.  It’s nowhere near as good as A Charlie Brown Christmas, but Christmas is better than Thanksgiving, so there ya go.  With a 30 minute run time and tons of nostalgia, it’s definitely worth adding to your Thanksgiving lineup.

Here’s one of my favorite comedies PERIOD, that just so happens to revolve around Thanksgiving.  It stars two of the greatest comedians of our time, Steve Martin and John Candy.  Supporting we have Lalia Robins, Michael McKean and Dylan Baker.  Steve Martin plays Neal, a NY marketing executive who’s trying to make it home to Chicago for Thanksgiving.  His path crosses with Del (Candy), an extremely annoying and rambunctious shower salesman.  The two of them are both going to Chicago and decide to travel together.  Hilarity from start to finish!

This one I get some questions on.  First of all, it’s one of my favorite movies.  It stars Chris O’Donnell and Al Pacino.  Al Pacino plays Lieutenant Colonel Frank Slade, a washed up alcoholic ex-military type who’s blind.  He’s also quite the asshole, but in a totally loveable kind of way (kinda).  Charlie Simms (O’Donnell) is attending a boarding school and he’s on his way to an Ivy League education.  Along the way him and some of his rich buddies pull a prank and the headmaster gives them Thanksgiving break to get honest about it.  Charlie goes off and gets himself a Thanksgiving job to save up some money babysitting Frank while his family leaves for Thanksgiving.  Once Frank’s family leaves, he informs Charlie that he’ll be going to NY and Charlie will be his chaperone.  It’s extremely well made, perfect script/story, it takes place around Thanksgiving, and Al Pacino knocks it out of the park.

Why you ask? Because it’s the best fuckin movie ever that’s why!  Ok ok ok.  The movie is literally perfect, and it never gets old.  Every time I watch it, I see something I’ve never seen before.  It makes me give thanks for my family and friends and the fact that I’m not sitting around the dinner table with my jaw wired shut because I took out a cop and his buddy.  When it comes to movies to watch on Thanksgiving The Godfather should be on your list because somehow it finds its way onto every list.  Al Pacino, Marlon Brando, Robert Duvall, Diane Keaton, James Caan, Sterling Hayden…The gang (hehe) is all there!!  Leave the gun, take the cannoli. 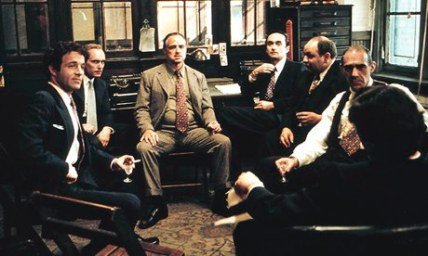 Much like The Godfather, The Avengers literally never gets old.  By some mysterious spell it has me under or some such thing, I just can’t get sick of it!  I’ve seen it probably 50 times and love it just as much as the first time.  Thor’s pain in the ass brother Loki is at it again only this time, earth’s survival is at stake.  SHIELD gathers together the mightiest of heroes on earth to form a team, The Avengers, to stop Loki and his diabolical plot to destroy earth.  Iron Man, Hulk, Thor, Captain America, Black Widow, Hawkeye…they all show up!  Special effects are better than anything you’ve ever seen, funny, scary, sad at times and overall extremely badass, The Avengers is easily one of the best action flicks ever and it’s fun for the whole family!  Every time I watch it I’m thankful that it was made.  Make it a part of your Thanksgiving traditions and you won’t be disappointed! 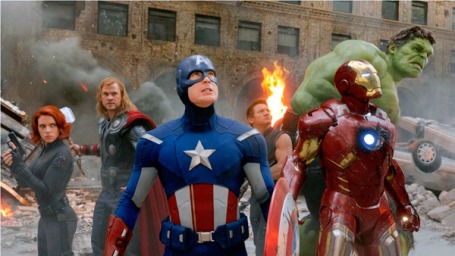