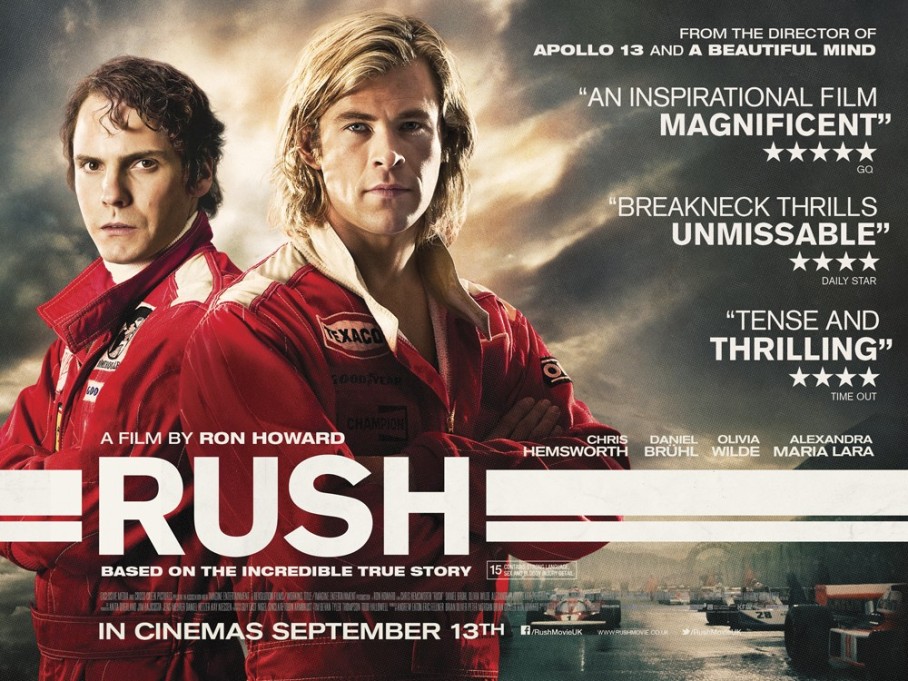 Here’s Ron Howard’s re-creation of the highly intense era of Formula One racing during the 1970’s, culminating in the 1976 Grand Prix.  It stars Chris Hemsworth, Daniel Bruhl, Olivia Wilde and Alexandra Maria Lara.  The piece focused on the rivalry between drives British superstar James Hunt (Hemsworth) and the more conservative Austrian Niki Lauda (Bruhl).  The story starts with each of them coming up through the Formula 3 circuit gunning for the big show.  Their rivalry kicks off almost instantaneously with a tense disagreement off the track after the race.  They each evolve, both pushing themselves and their teams harder and harder with 90% of their focus on beating the other.  Chris Hemsworth’s portrayal of James Hunt was full of playboy appeal like one would expect.

In hindsight I remember thinking “well wait this just seems like how he is in real life, is he really portraying a character or just acting like he does off screen?”  Then it hit me that maybe that wasn’t a bad thing, he had me so convinced of his character I thought it was real, kudos my friend.  Daniel Bruhl stole the show though, hands down.  His performance was an absolute tour de force that very well may win him an Oscar.  He channeled every bit of power he could through his character flawlessly.  His injury and recovery were intense and riveting, making you shift your opinion over the course of the film. I feel somewhat obligated to speak to the faint of heart or those with a weak stomach, certain scenes are pretty rough.  Ron shows us how it would REALLY be to be in a car that’s on fire for over a minute, and by doing so empowered the character with all the drive and emotion he could to make the final race as epic as humanly possible. The film was backed by an expectedly impressive and uniquely crafted score from Hans Zimmer, the scenes of character rivalry and dialogue-driven emotion cut right to the core; and the race scenes had me on the edge of my seat begging for an outcome from the minute they started. The conflict between the two was built flawlessly, their quips and digs were softly spoken at first…but they packed one hell of a punch.

As they each progressed through the circuit the tension turned dirty, and every slight between them made me shake my head pondering how on earth it didn’t come to blows. It was great because I was most definitely rooting for each of them at different times, which made the peak of the film 10 times as climactic.  I’ll be honest I didn’t know the history of all of it going in, which in a way I am thankful for.  It made the ending’s delivery and outcome mean so much more seeing as how I was in the dark the entire time.  I wanted each of them to win for different reasons, in different ways.  Howard’s resolution made sure to keep the audience pleased as it’s an ending where everyone wins.  It’s a must see, an absolute triumph of rivalry and sportsmanship, not to mention flawless filmmaking typical of a movie mogul like Ron Howard. He absolutely brought his A-game on this one and didn’t waste any time brushing off the cobwebs from his 2 year Hiatus (3 if you don’t count The Dilmma). 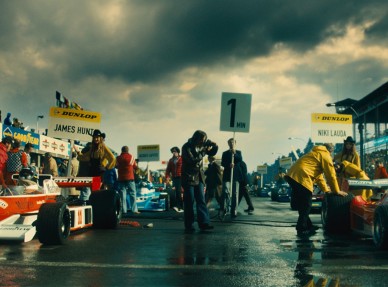 It reminded me what a powerful high budget motivating Hollywood blockbuster is all about.  It delivered what this summer’s big movies couldn’t: a powerful story backed by an even more powerful screenplay portrayed by incredibly talented actors without any of the cliché fluff that typically turns me off from the stereotypical Hollywood productions. I left the theater, jumped in my car, fired her up and felt inspired…until of course I came back to reality and reminded myself that my 95 Sentra is pretty far from a Formula One Ferrari.  Regardless, the film left a feeling of absolute satisfaction and appreciation for Ron Howard’s impeccable style, the power of the characters and the story, like any big blockbuster very well should.