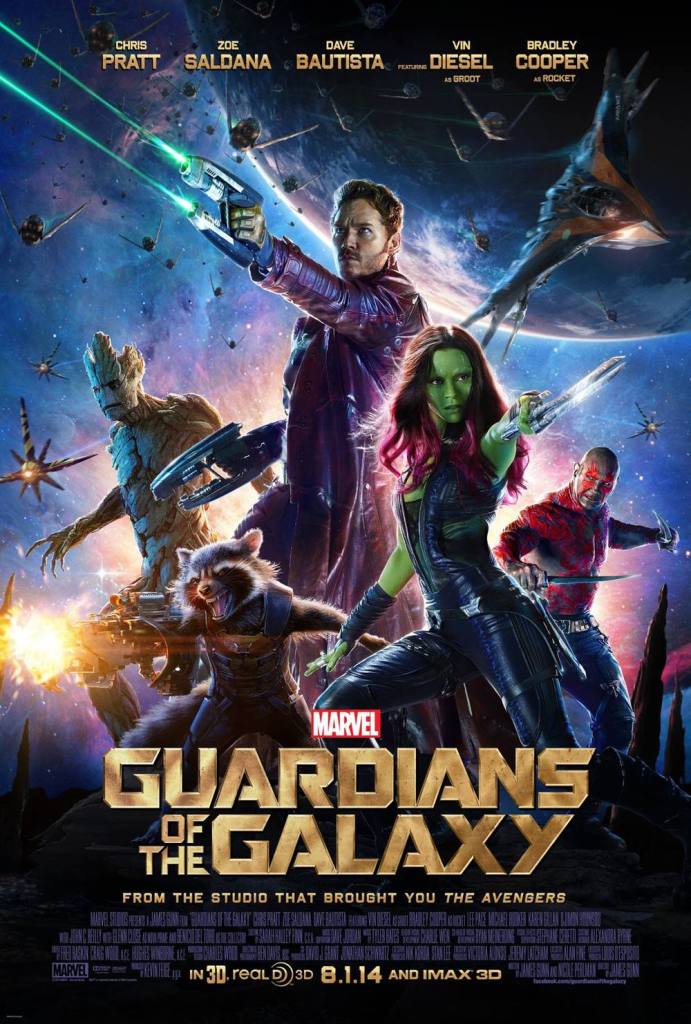 What once was looked at as a monumental risk to Marvel studios is now quite possibly their most successful instalment so far.  We’ve got Tim Gunn behind the camera and it stars Chris Pratt, Bradley Cooper, Vin Diesel, Zoe Saldana and Dave Bautista.  Peter Quill aka Star-Lord (Pratt) was abducted at a very young age from earth after the loss of his mother. Fast forward 26 years and we see Peter all grown up with fancy gadgets and everything.  He’s on a mission to steal an orb, of which he doesn’t know the significance, but knows the job pays.  From the minute he gets the orb he attracts several foes and manages to evade them quirkily.  Eventually Peter finds that he’s even attracted the likes of Ronan the Accuser who works on behalf of the mighty Thanos who’ve coincidentally sent a highly trained assassin to kill him and retrieve the orb.  Peter manages to ally a small group of misfits like him who all have common goals and agree to help get the orb to a buyer.  Along the way they discover the true contents of this orb, and a payday quickly turns into a mission to save the galaxy from Thanos and Ronan, Peter embraces his badass outlaw name and persona Star-Lord, and BAM! Guardians of the Galaxy are formed.  Man!  I haven’t had this much fun in a movie in longer than I can remember.  First of all, the soundtrack was absolutely perfect and really a character of its own.  In his possession the entirety of the film was “Awesome mix tape vol. 1” which he listened to chronically.  This was sublime because not only did it keep Peter human, but it carried the emotional tones of the movie.  Another key part was the opener.  Marvel does follow a template with their films, which is fine because it works.  What I loved about this one is that there is no time wasted, the first 4 minutes are powerful and do a better job of building up our hero than most other Marvel flicks.  The reason this film is so successful is because it really caters to all ages.  Marvel has quick clever writing; the movies always have 5-10 bits of good comedy.  Guardians, however, was absolutely hilarious.  I laughed out loud so many times I lost count and god it felt good!  This first time we see Star-Lord as an adult I was literally smiling ear to ear.  I am a little biased towards writer/director Tim Gunn as I am a huge fan of what he’s done in the past 10 years.  The comedic timing was absolutely spot-on.  The group dynamic was another thing with heavy emphasis.  His group of “losers” has no concept of love or unity, and is clearly starved for it.  The characters are goofy and quirky and borderline cheesy, but somehow it never got full on cheesy.  Towards the end of the film you love each character so much that some of the situations they’re put in really pull on the heart strings.  Ok, so, music-awesome, acting-perfect, script-tip-top…why not a perfect rating?  Ok here it is.  The action sequences.  Now, Tim Gunn is somewhat of a rookie to the action world, and he didn’t have Joss tapping his shoulder saying “no, that doesn’t work like that”.  The action sequences, some of them at least, were really difficult to follow.  I had a hard time deciphering what exactly was going on.  It didn’t really take away from my experience overall, but I would have liked higher quality action sequences.  Either way I was in a theater full of kids and they were going bananas over it so maybe I paid a little too much attention.  On a Tuesday night my theater was packed, and after grossing over 160 million opening weekend there’s no doubt the film was well received.  Overall, the cast was absolutely perfect, the script was incredibly fun and touching, and the music tied it all together as one of the most uplifting and motivating Marvel productions yet!