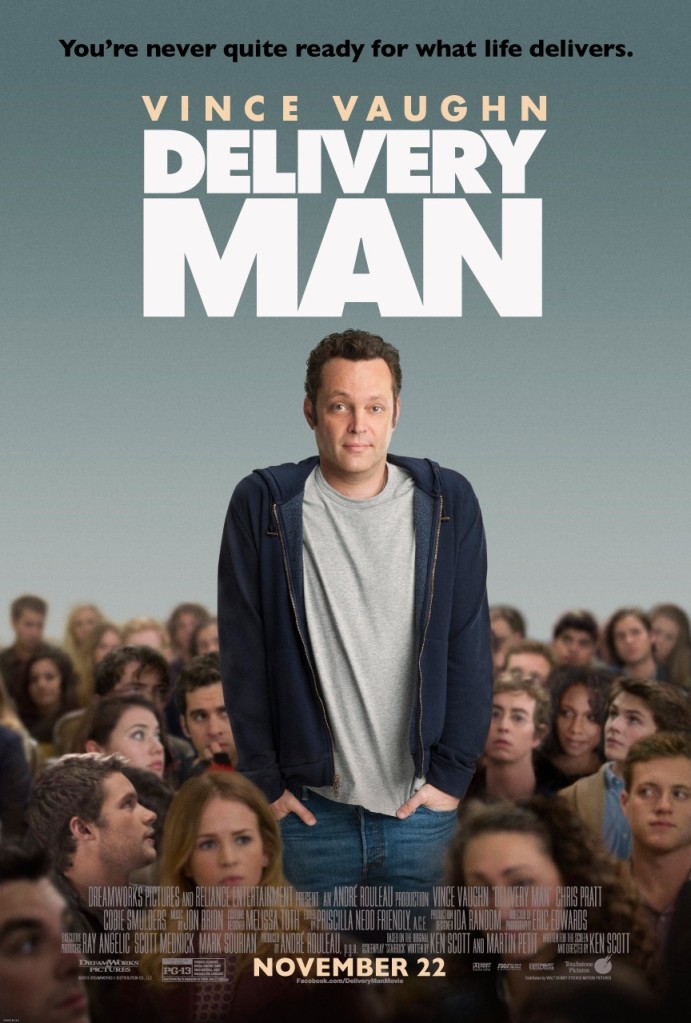 Let me just open this by saying that I love Vince Vaughn.  I’ve really missed him the past couple years and felt like maybe we’d lost him forever.  I was definitely not a fan of The Internship and felt like it was a sad desperate attempt to revive the comedic genius that was Wedding Crashers but hey, I’ll forgive him.  Starring Vince Vaughn, Chris Pratt, and Cobie Smulders, Delivery Man is well stocked with comedic talent.  David (Vaughn) is a washed up middle-aged delivery man working for his family’s meat company.  He’s in over his head in debt and struggles to maintain even a shred of mature responsibility.  His disappointed girlfriend Emma (Smulders) gives him a firm talkin’ to letting him know that he’s either got to man up, or get out.  While dealing with the disappointment from her he’s also getting it from his father and brothers back at the meat shop as he can’t seem to keep his word on anything.  As if the guy doesn’t have enough problems already, he’s contacted by an attorney from a fertility clinic.  The attorney informs him that while he was runnin’ his sperm like the Mexican cartel runs drugs the clinic made a mistake and accidentally impregnated a few too many women.  The load he’s left with (pun?) is a hefty 533 children.  At first he flips out a bit as I imagine most would.  He consults his friend Brett (Pratt) who had some sort of legal experience some time ago.  They decide to take action against the clinic and sue them for their mishap.  In the process David is given an envelope with a profile for each of his 533 children.  With David’s girlfriend threatening the end of their relationship unless he creates a real life for himself, he quickly sees opportunity to use this as way to turn his life from minimal existence, to actual meaning and self-worth.  From here David takes a turn for the responsible and starts going from one kid the next, trying to positively impact their lives and assume some sort of responsibility for their existence.  Personally, I loved the flick.  I thought to myself, he’s back!  I loved Vaughn’s timing, and his ability to turn simple gestures and faces into absolute hilarity.  The film was also pretty touching and had a good message to it.  I liked the way the story and script (for the most part) steered clear of MOST cliché Hollywood rom-coms.  The basic plot layout definitely fit the cookie cutter mold of PG-13 let’s make our money back studio pictures, but for the most part, pretty original.  I liked the realism of a not so realistic story.  Each kid he came across had their own problems, faults or perfections, none of which were TOO over the top or to the point of being un-believable.   As these films typically climax, he’s met with conflict between his new world and his past.  He’s in deep with the wrong people and needs money to get himself out.  If he sues the clinic he can pay off his debt and move forward with his girlfriend and be free of 533 kids.  If he doesn’t, he’ll owe hella money and most certainly piss off his already sensitive girlfriend but he’ll be able to continue his personal quest to provide for these kids a father figure, or self-proclaimed “guardian angel” (super cheesy, but I’m quoting the movie so don’t judge me).  Overall, great flick.  I had fun; I laughed, and was impressed with its emotional touch.  Cons?  The ending was a bit of a let-down, borderline anti-climactic and I felt like the very end of the film could have been executed with more resolve and satisfaction.  If you like Vaughn and his comedy, check this one out!